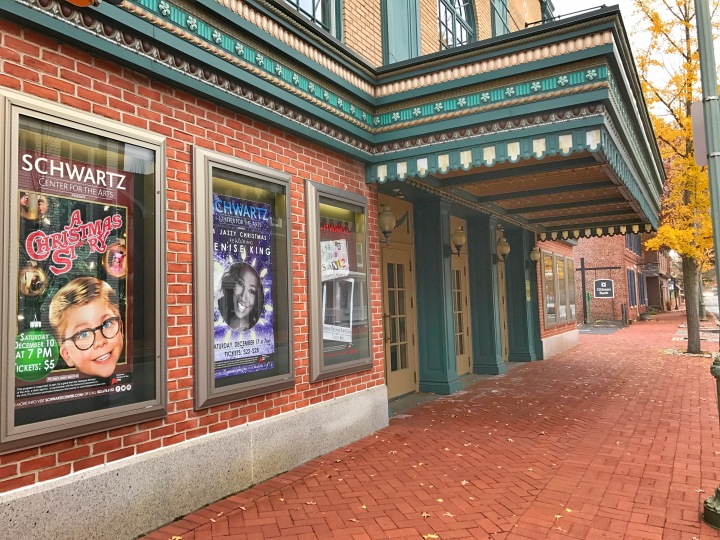 Little Tony Christmaspants paces outside the local arts center. Locked in the showcase behind him are posters for A Christmas Story, The Nutcracker Ballet, and a portrait of Santa Clause who is appearing at the theater.

Billy Yule Cakepop hears the pitch over his humming of Santa Clause is Coming to Town from across the street. When the traffic light changes, he crosses the street eager to hear more.

“How much for a ticket?”

“Sixty-dollar show. You’ll get in. Meet the big guy himself.”

Billy Yule Cakepop glances to the portrait of Santa in the showcase. “Well, is it a big production?”

“No, I don’t think you understand. Aint no production. Sixty bucks, you get in to meet the big guy; Santa Clause himself. Bonus, he’s gonna autograph a photograph for you. Nice, right? Best of all, you’re automatically on the nice list for one year. That’s important to you, right? To be on the nice list.”

Little Tony Christmaspants is taken aback. “Suppose so. You suppose so? I would suppose so, because I know a bit about that list. Red Jolly is constantly checking that list. Every day he’s looking over that thing. And he checks it personally; him. No contractors, or advisors, or automatic computer update thing; him. Let me tell you, that nice list is always getter shorter, while the naughty list get longer. Not a lot of names going the other way if you catch the drift of my meaning here. Very easy to go to the naughty side, but it takes some real work to move back to the nice side. Very difficult let me tell you, so a little face time and a highlight on the nice list with the man himself is absolutely to your advantage here.”

“I don’t think you thought this through, man. You haven’t thought this through at all, have you? Look here, sixty dollars gets you in to see the big man, one. Two, you’re on the nice list. You want to be on the nice list, right? You don’t want to be on the naught list. Do you? Look. No, of course you don’t. And here’s the other thing. Sixty dollars. Sixty dollars. Have you ever thought about how many presents Santa’s given you over his lifetime? Huh? How many presents you gotten from him? “

Billy Yule Cakepop smiles. “I got a lot.”

“That’s another thing. Christmas. Did you ever think about this? The guys got bills, doesn’t he. I mean Santa’s got a multimillion dollar operation going on up there, doesn’t he? Look, he’s gotta pay the elves for one.  Right? And their unionized so you know they aren’t cheap, right? They all want individual housing, right? Ok, so you got the elves, you got the union, you got the housing, electricity. Every bodies hungry, right? So, you got to provide food, right? So, you got the food. Food you got to cook. Cook, there’s an electric bill, there’s a heating bill. You wouldn’t believe what it costs to assemble all the materials to put together all these gifts for people. That’s not even counting delivery. Those reindeer are taking their cut, let me tell you. Every year he’s paying every country on the planet for a permit to fly into their airspace. Let’s not even talk about the liability insurance rates for this kind of operation. Not to mention all the bail money, cause every year, even though everyone knows he’s coming someone calls the cops and ol’ jolly is arrested on a breaking and entering charge. That’s a lot of money. And you didn’t hear this from me, but there are bribes to certain officials in certain countries, but that’s not on me, not for me to discuss. Although, naughty list everyone one of them, let me tell you. So, your sixty bucks that helps a lot. You may not know it, but it helps the big guy a lot.”

Billy Yule Cakepop thinks for a moment. “Well, what if I give like a hundred.”

With an embarrassed chuckle, Billy Yule Cakepop says, “Well, what if I give two hundred?”

Little Tony Christmaspants scowls, “Don’t be disgusting mister, alright. Don’t come here spouting your perverted ideas. Mrs. Clause, she’s a wonderful lady. Alright. She deserves a little bit of respect. You don’t realize what she has to go through with that big red jolly guy. I mean he’s out all the time sitting on the thingies with the kiddies saying hello and making a list. He’s hardly ever home cause he’s gotta look over the elves, he’s gotta look over manufacturing, and quality control, and he’s gotta look over everybody. He’s a very busy man. So, God bless Mrs. Santa Claus to me that’s what I’m saying. That would be my preferred mode of thinking. Now you, you could be a degenerate. I don’t know. That’s up to you too, but here’s what I’m going to say. You say something like that again to me, right on the naughty list. Naughty list is you. You’re getting nothing the rest of your life from Santa Claus. Alright. So, what do you think? Sixty bucks come on in, don’t come on in, it’s up to you.”

Billy Yule Cakepop’s face turns red. “The Santa at the mall is free.”

“Well, of course, he’s free. He’s a helper, a stand in, a poor imitation of the real thing. Listen, I don’t want to talk out of turn here. He’s a good guy and all, right. He really tries, but he rents that suit cause he’s not even Santa blood. No relation there. None. He’s a casual seasonal. Not even under contract. There’s no benefits there, and very little motivation to really put forth any effort. Do you ever see him write down anything those kids say? Nope. Doesn’t happen. Never has a pen or pencil or notepad or anything at hand. Red Jolly is constantly following up to double check his submitted wish-list list. That’s why there’s an age limit out there, which, by the way, you exceed. I love him like a human, but he’s really there as a photo op. On the other hand, the real deal, the accountable, master of the naughty/nice list is right behind that door. “

“Alright, sixty bucks it is.”

Little Tony Christmaspants smiles while smacking Billy Yule Cakepop on the shoulder. “That’s a good decision on your part, my friend. Go on in.”